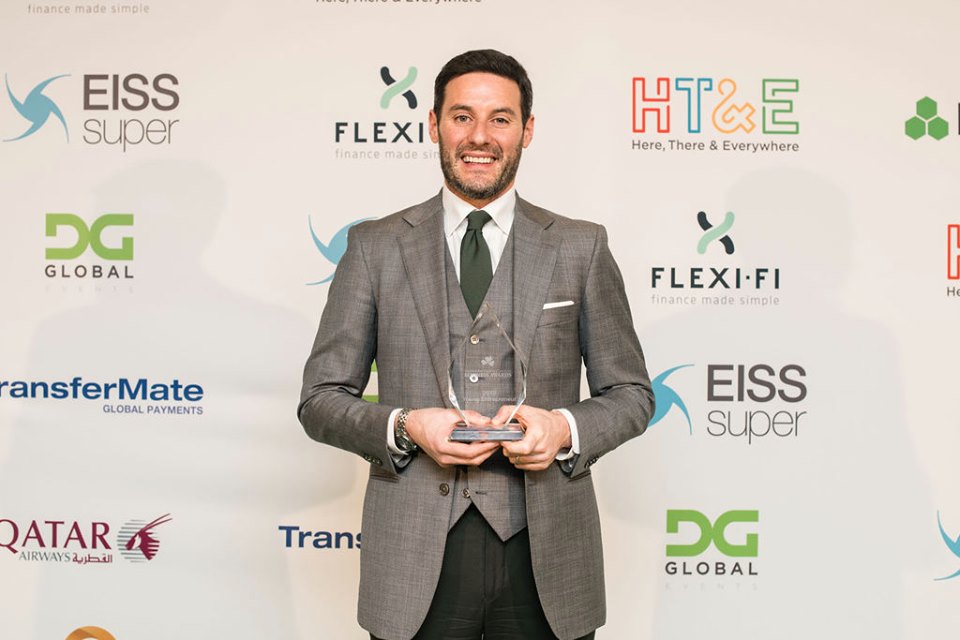 In this first of two special guest blogs, our former Dublin committee member, Brooke Tully, now resident in Northern Ireland running a new business, catches up with some of this year's Irish Australian Business Awards winners with Northern Irish roots. This edition finds her in conversation with Ryan O'Hare, winner of this year's Young Entrepreneur award.

It takes (more or less) nine months to grow a baby and a successful business. At least, that was the experience for the O’Hare household when both a baby and a budding business started brewing five-and-a-half years ago.

From Northern Ireland to Victoria

But let’s rewind further back to 2006, when Co Down born-and-bred Ryan O’Hare filled his backpack and headed to Australia.

He knew “nothing and nobody”. However, prior to landing Down Under Ryan had spent several years working in commercial aspects of education, and so it was not difficult to find Melbourne-based employment fairly quickly.

His career path led him to a position with Pearson Education, an eminent provider of teaching resources, textbooks, software and online resources for schools. Part of his responsibility included identifying and understanding world-leading innovative business models that might trigger new development pathways for Pearson.

For five years Ryan travelled the globe observing and learning what was happening in higher education in the online space. He soon realised this industry offered untapped and incredible opportunities within Australia and the Asia-Pacific.

He soon recognised the kernel of a new business concept.

Leaving a Stable Career to Pursue a Start-Up

Someone once told Ryan to find a good, stable job in a big, secure business, and to stay there for life. Little did they know Ryan. Their advice was anathema to anything he had ever done.

And so that’s how this story finds Ryan; in his home kitchen, which had been repurposed partly as an office space and partly as a sick bay for his wife, pregnant with their first child and wondering if he should have stayed in that secure and stable job for life after all.

Ryan had realised an opportunity to significantly scale higher education’s online offering and in so doing, create global access to virtual education.

He knew there was market demand from students worldwide; he knew there was a willingness for the Australian university sector to provide; but he surmised they couldn’t do it on their own. They needed someone to create the content, build the tech, connect to the students.

The intent and model was clear, but Ryan was flying solo. He had no history of successful delivery, no testimonials. He needed a university to take a chance on him.

A Start-up Story of Timing and Luck

It’s not all about endless hours of hard work and planning.

Sometimes a successful start-up can springboard from a healthy dose of good timing and good fortune. Ryan to a degree orchestrated both, meeting some Chicago-based Americans who were pursuing a similar concept in the US. The two groups convened and decided to merge, with Ryan taking care of Australia and the Asia-Pacific, and his partners managing the US.

And so at nine months two babies were born when an Australian university opted into Keypath Education, and Ryan’s wife delivered their first child.

From Zero to Rocket-Fueled Take-off

Suddenly Ryan needed to move out of the kitchen and find talented people. Fast.

Once again he asked others to take a chance on him. He recruited people on little more than a business plan, a prototype-in-the-making and a positive attitude. He asked highly skilled, experienced professionals to take a risk and leave their secure, stable jobs to come work for his start-up.

Ryan quickly realised he had to not only deliver this service to his new client, he had to create a business from ground-up and do it yesterday. His world began to brim with the “uncool stuff” - how to insure his staff, where to find an office beyond the kitchen, what internal policies needed drafting, contracts, finding an accountant, buying a good printer at a great price…

It’s no business secret that one of the great ironies of entrepreneurialism is the reliance on teams. Ryan’s team was key.

Finding brilliant experts in their field is, in Ryan’s words, a huge part of Keypath’s success. As he puts it best:

“I find people smarter than me and then I provide for them a pathway to success.”

No guesses where Keypath Education sits.

Ryan is not one to look over his colleagues’ shoulders, and he encourages them to seek out new thinking, new ways and new innovation, even if they ultimately fall short.

It’s not unlike starting a new business and experiencing plenty of rejection. You only need a few acceptances to cancel things out and make it all worthwhile.

When the Honeymoon Buzz Falters

Looking back, Ryan believes a fluid business plan was also paramount to Keypath Education not only growing, but staying smart.

As any start-up knows, the first iteration of a business plan is never right, but the Keypath team reviewed theirs on a fairly regular basis. Years one and two, which he refers to as the honeymoon phase, were a veritable explosion in growth (there are now upwards of 160 employees). But by the end of year two some considerable mistakes had been made, thus prompting a full re-evaluation of the plan.

With the luxury of hindsight, Ryan now sees this time as a serendipitous circuit-breaker. Had Keypath Education continued on the same path it would have imploded. The mistakes were yellow canaries and the team read the warnings and adapted.

The result? A business that is now the largest of its type in Australia, managing more than 12,000 students world-wide and working with more university partners than any other competitor. Which brings us to the Irish Australian Chamber of Commerce Business Awards.

Becoming Involved with the Irish Australian Chamber of Commerce

Ryan vividly remembers his first IACC event. He walked into a Sydney pub one night and instantly felt as if he were surrounded by 40 people identical to him.

Everyone had diverse backgrounds, but a similar story; they were linked by start-ups, entrepreneurialism, leaving home to make something even more of themselves. The Chamber played a big part in helping Ryan with the administerial side of establishing his business, and connecting him to invaluable contacts. He wanted to invest back into the organisation, and so assisted as a Mentor.

Last year he was nominated for the Young Entrepreneur of the Year award and, thank goodness, he was unsuccessful.

As part of the mandatory submission criteria he had prepared a video submission, and it was self-confessed rubbish. He’d done in the on the fly with his smart phone. He sat at the Awards Ceremony that year and watched as the winner’s video - a terrifically produced piece of content - was aired. He cringed thinking of his own quick effort.

He did not repeat the mistake in 2019 - see for yourself.

We are delighted to welcome Keypath Education as a Corporate Member of the Chamber. To find out how your business can be part of our growing network, click here.