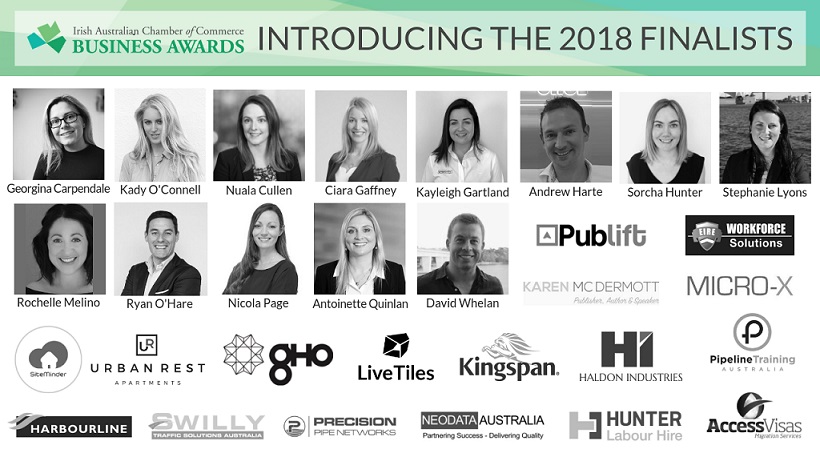 The Irish Australian business landscape is ever changing as new generations of professionals make their mark and bring their concepts to market. This was in evidence on Friday night (12th October) in Sydney at the 4th annual Irish Australian Business Awards, held in the presence of Ireland’s Ambassador to Australia and the recently appointed Consul General in Sydney.

The Awards are an initiative of the Irish Australian Chamber of Commerce (IACC), supported this year by IDA Ireland, LeasePlan Australia and TransferMate Global Payments, which identify and celebrate the ongoing and extensive contribution to business success, in many cases, on a global scale, that Irish Australia brings.

A theme that emerged this year, in many categories, was the potential positive social, community and environmental impact of many of our finalists’ and winners’ businesses. Not only are they creating businesses that are innovative and impressive, they are building businesses with purpose.

Speaking at the Awards ceremony, IACC President Carl Walsh said, “Our finalists exhibit a combination of Irish and Australian attributes such as application, resilience, innovation, dreaming, and communication combined with healthy doses of humour, perspective and agitation. These attributes have served them well and will continue to serve them well.

Importantly, these attributes also serve the broader community well. They are leaders who go beyond career and business and positively impact their communities on so many levels. This is their identity, a shared identity that shakes up the world for the better”.

This year’s Startup Award went to Haldon Industries, who deliver high quality solutions to the management of waste water, water extraction, dewatering, and the treatment and disposal of waste. They are working to improve and make safe our environment, one site at a time.

Joining them on the winners’ list was Kingspan, in the Established Business category. Their new Victorian base has become Australia’s first ever Green Star-rated manufacturing facility, with a $40m investment and creating 50 jobs.

In the Young Professional category, Stephanie Lyons, Chief Risk Officer of EISS Super, a multi-award-winning industry super fund caught the eye as she highlighted her ability to not just contribute to transforming a growing business but her ongoing volunteering in the community, including at Ronald McDonald House in Randwick. It was notable that this year’s Young Professional finalists were all female, an indication of the sheer number of impressive young women involved in the Chamber’s networks.

Memories of the recent business delegation to Ireland from Australia and New Zealand were to the fore when LiveTiles, who the delegates visited at their new Sligo innovation centre, took out International Trader. Their developments in the field of Artificial Intelligence are of global scale and we’re sure we will hear more of their story in future. Elaine Murphy, General Manager Ireland with LiveTiles noted “LiveTiles was born in Australia. It’s a hyper-growth tech firm and now for Ireland to be part of that global expansion plan is fantastic”.

SME of the Year was keenly contested as always with the judges unable to separate GHO, a business that has reimagined itself and moved into higher value activities under the leadership of Trinity graduate Eithne McSwiney and Micro-X, our first South Australian winner and the first company in the world to commercialise carbon nanotube technology. Micro-X’s management team includes Belfast-born Peter Rowland as MD and Waterford-born Georgina Carpendale as CFO.

Describing the impact of the changes made at GHO, Eithne said, “We’ve actually stopped chasing volume and started chasing value. Year on year we’ve grown by 25% and have also engaged a number of new clients including Kyckr, Kerrygold and Enterprise Ireland. We hope to continue this trajectory of growth and ultimately open a GHO office in Dublin”.

This year’s winner of Young Entrepreneur was perhaps the most striking story of the night. Andrew Harte came to Australia from Roscommon in 2011 when the construction sector declined in Ireland. Starting off as a labourer, he secured work as an engineer while building his first company in the evenings, with his wife Denise supporting the startup from the kitchen table, to a group of four companies now turning over $20m and employing 180 people. It was a real migrant story of achievement and Andrew’s ability now to help the Australian dream become a reality for many other young Irish arrivals was impressive. Andrew said, “We are very proud of our Irish roots and we have supported the sponsorship of a number of Irish people, allowing them to work and build their lives here in Australia”.

The fact that Andrew’s sister, who had come to Australia on a working holiday to help him grow the business, had travelled to Sydney for the Awards made it an even more special occasion for the Harte family. But it didn’t stop there - before the night was out, Andrew had also picked up the People’s Choice publicly voted category and even managed to hold the winning ticket in the raffle. Some guys have all the luck!