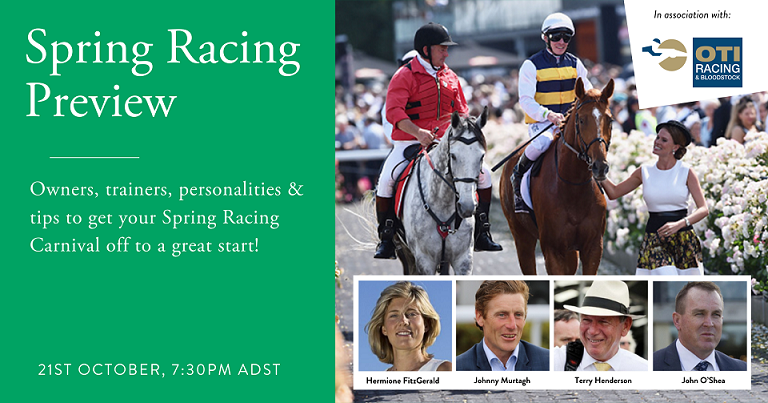 Hosted by OTI's Hermione FitzGerald and Barry Corr, CEO of the IACC, our Spring Racing event is back for 2021, albeit as an online event.  They will be joined by special guests including Johnny Murtagh, John O'Shea and Terry Henderson.

Learn more about the links between Ireland and Australia in the Business of Racing, hear insights from the trainers, owners and our special guest tipster with all your best bets for the Carnival!

Johnny Murtagh was widely considered to be one of the greatest big-race jockeys in the world for the better part of 20 years. He is now Training his own horses in Kildare, including several for OTI Racing's Australian owners. Johnny's most recent G1 win was in last month's Irish St Leger, where he defeated last year's Melbourne Cup winner!

John O’Shea is considered amongst the elite trainers in the Sydney racing ranks with 28 Group 1 wins next to his name. John celebrated his very first Group 1 win in 2002 with Shot Of Thunder in the Toorak Handicap at Caulfield. Since then, John has enjoyed success at the highest level with top class gallopers Charge Forward, Foxwedge and Racing To Win before taking up the Head Training position for Godolphin, Australia in 2014. In that time, he celebrated more than 550 winners including 10 Group 1 victories with the likes of Astern, It’s Somewhat and Exosphere. After 3 years, John returned to the public training ranks in August 2017, setting up a stable at Randwick surrounded by a great team, loyal owners and quality horses.

Terry Henderson formed OTI Management Pty Ltd in 1999 with professional cricketer and media personality, Simon O’Donnell.  Terry and Simon had extensive involvement within the racing industry and saw an opportunity for clients to experience the thrill of racing quality bloodstock in partnerships. OTI is recognised as the premium supplier of thoroughbred partnerships within the Australian racing landscape.

In 2003, OTI bolstered the business by looking to Europe to source quality bloodstock. Securing Northern Hemisphere imports and racing them in Australia became a distinctive feature of the company’s approach. OTI’s importation of European thoroughbreds to Australia led the way for the rest of the industry, with many owners following suit. Over the past two decades, OTI has experienced immense success on the track, with over 100 Group and Listed wins, including 10 Group 1s.