When
October 15th, 2020 10:00 AM   through   11:00 AM
Where
Event Fee(s)
Contact Details
Are you a Founder of a Technology Business or interested in investment opportunities within the sector? This internationally focused virtual event will help bring together Funders and Founders to share insights into what each looks for in a deal, how the mechanics work and what's possible.

With a recent case study in Finch to set the scene, we look forward to once again bringing the best of Ireland, Australia and the USA together to build meaningful business networks and collaboration. With guest speaker Adrian Mendoza, General Partner & Founder of Mendoza Ventures. 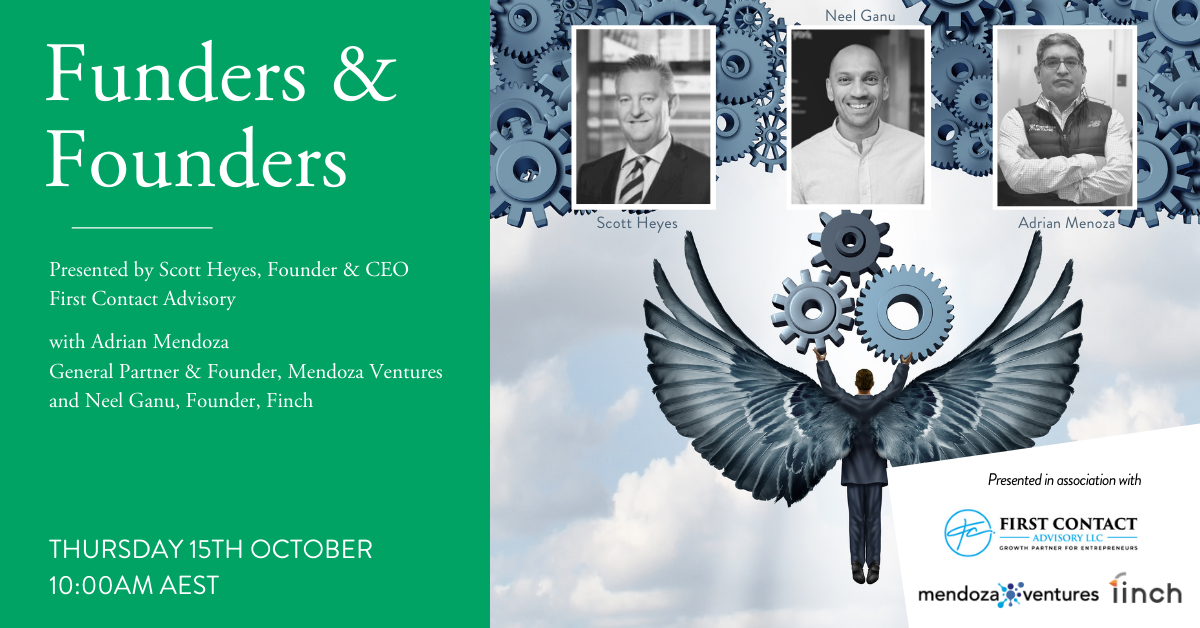 Members  FREE  - This Virtual event is FREE to all financial Members of the Chamber - please contact admin@irishchamber.com.au to receive your free link.

Associates & Guests   $30 +GST  - Associates and Guests are welcome to register and join this digital event via the paid registration login to your left.  After registering, you will receive a confirmation email containing information about joining the session.

A recording of this event will be available and exclusive to Members only for viewing here in our Resource Library.
ABOUT OUR GUEST SPEAKERS
Adrian Mendoza is an experienced entrepreneur, investor, and operator. He has lead both creative and technology teams during his 20 years of experience. In 2009 he co-founded Marlin Mobile, a startup in the Mobile performance testing space, that raised 3 million in venture funding. In 2014, he pivoted that company to co-found Apptient - focusing on the mobile ad tech space. He has been a startup CTO since 2009 and has built numerous technology teams, SaaS products, and product pipelines. In 2016, he founded Mendoza Ventures, a Boston based pre-seed AI, Fintech, and Cybersecurity fund.

He is the author of "Mobile User Experience", a book on mobile user experience published by Elsevier in 2013, adapted industry wide as the standard for mobile user experience education, and of the video series “CSS for designers” published by O’Reilly on 2015. Adrian earned his Bachelors from the University of Southern California and his Masters from the Harvard Graduate School of Design.

Neel Ganu  Founder​, ​Finch
Always looking for unique solutions to difficult problems, Neel founded Finch in April 2019 to fundamentally change the way people manage their money, empower younger generations financially, and help close the wealth gap.  Finch is on a mission to empower people to achieve their full financial potential. The first step of this journey is re-inventing the checking account, and helping people put their money to work while still having access to their balance – even the invested part!

Before founding Finch, Neel was a Senior Director at Fidelity.  Neel also spent nine years working in financial services across Asia, Australia, and Europe, where he specialized in strategy.  Determined to understand how fintech companies are built, Neel led MIT sponsored research at PayTM to understand fintech at scale, and he was the first US employee at Berlin-based challenger bank N26, where he learnt how to build a bank. Neel is a Harvard Business School case author on core banking systems in the US, and once attempted to buy a community bank.  Neel is an evergreen enthusiast of how fintech is changing the world.

Neel has undergraduate degrees in Computer Science (Monash University), and Finance (University of Melbourne), and an MBA from MIT Sloan.  Neel is also a CFA charter holder.
Neel is Australian, however, lives outside of New York.  He loves to push himself in group fitness workouts, enjoys taking breaks with online chess, and has an unreasonably large collection of Lego.
Scott Heyes  Founder & CEO, First Contact Advisory
First Contact Advisory is a bespoke independent firm that partners with entrepreneurs and business owners. First Contact Advisory works with these parties on their corporate strategy to facilitate their growth trajectory that matches their dreams and ambitions.

First Contact Advisory’s founder and CEO Scott Heyes has been helping businesses grow and transition to corporate entities and new markets for over 25 years. Scott has extensive global experience in partnering with clients to open international markets and opportunities. Based in Boston in the United States he can be contacted at scottheyes@firstcontactadvisory.com or on +1 617 935 5796.