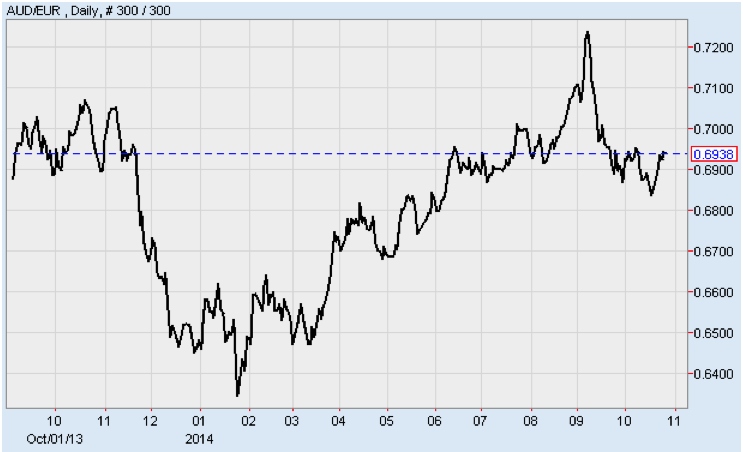 In this guest blog, Jim Vrondas, Chief Currency strategist Asia-Pacific at our Corporate Partners OzForex, shares some thoughts around recent movement in the currency markets and potential future directions.

Currency markets breathed a sigh of relief following the release of the European bank stress tests. After nudging 1.2600 against the greenback last week the euro started the new week on a positive note, pushing above 1.2700 seemingly buoyed by the results.

Of the 130 banks tested across the region 25 failed, with the ECB identifying a gap of 24.2 billion euros in capital required as of the end of 2013. When you distil this down further the results seem more benign with 19 billion already raised this year, the aggregate shortfall is reduced to 6 billion.

The markets will now focus more specifically on the five major banks that need more than 200 million euros and must submit a capital plan, no doubt more headlines will follow.

The credibility of the tests are quite rightly being questioned but on the positive side the result is significant because it emphasises the large capital raising and de-leveraging efforts the banks have undertaken since the last stress tests in 2011. The good news is that bank spreads have tightened making them more stable – for now.

Although the banks are in a stronger financial position the European economy is still not looking that flash. The economic slowdown appears to be spreading from the peripheral to the core with signs of weakness in Germany and fears of a deflationary spiral across the region still evident.

With the ECB only just beginning to print money the banks will no doubt be encouraged to “give” more money away, but there are still question marks around how much of this money will reach the real economy and whether it will positively impact growth.

Higher AUD/EUR a boon for Aussies

For Australian importers or expats needing to send euro overseas the Aussie euro cross rate is still strong despite the EUR/USD gains this week.

Since the beginning of the year the AUD/EUR exchange rate increased 14 per cent to reach a high of 0.7244 in September, its highest level since June 2013.

Prospects for the Australian economy are still looking better than Europe, so the exchange rate fundamentals over the longer term should continue to reflect the disparity. In other words, despite the AUD/EUR being 4 per cent below the peak it seems to be setting up for another run higher over the next 6-12 months.

Jim Vrondas is Chief Currency strategist, Asia-Pacific at OzForex, a global supplier of online international payment services and a key provider of Forex news. OzForex Group Limited is a publicly listed entity with shares traded on the Australian Securities Exchange under the code "OFX".

OzForex are a Corporate Partner of the Irish Australian Chamber of Commerce and members of our group can access preferential rates and fee-free transactions by registering with OzForex via this link (please note that only this link will identify you as an eligible IACC customer) or by emailing Jon Sermon.