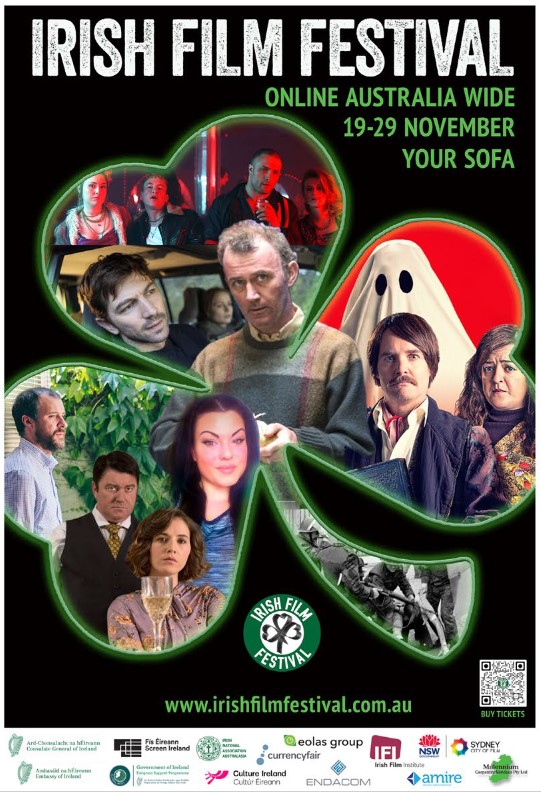 The popular annual Irish Film Festival returns from 19 - 29 November with its biggest line-up ever. Moved online this year due to COVID-19 restrictions, cinephiles all over Australia can now catch the best new Irish cinema releases without leaving their homes.

The online festival program is packed with award-winning dramas, documentaries, Irish-language features and comedies direct from Ireland, with no fewer than 11 Australian premieres.

Online Q&A’s with several of the film’s directors and some surprise guests will complement the impressive film line-up. The festival has also proudly partnered with Irish-run food & beverage providers to bring the taste of home to living rooms across Australia.

The official opening night film is the horror-comedy, Extra Ordinary. Starring Maeve Higgins and Barry Ward, the plot centres around a sweet, lonely driving instructor in Tullamore who possesses supernatural powers. Throw in a one-hit-wonder rock star who has made a pact with the devil, a levitating teenage girl and a love story and you're in for some extraordinarily quirky entertainment.

Tom Vaughan-Lawlor (Love/Hate, Avengers: Endgame, Maze) stars in the contemporary, urban drama, Rialto, which is set in Dublin’s docklands. Colm (played by Vaughan-Lawlor) is in his mid-40s and leads a comfortable life with two teenage children and a kind, loyal wife. But the death of his father sends his life into turmoil and, struggling with his loss, he finds himself in a same-sex relationship for the first time. Rialto was part of the Official Selection at The Venice Film Festival 2019 & at the BFI London Film Festival 2019. Calm with Horses is a tough and gritty drama featuring a violent family of gangsters in rural Ireland. Standover man Douglas Armstrong’s loyalties are tested when he is asked to kill for the first time. Features Barry Keoghan (Love/Hate, The Killing of a Sacred Deer), Cosmo Jarvis (Lady Macbeth, Hunter Killer) and Liam Carney (Braveheart, The Commitments, Gangs of New York).

Dark Lies the Island is written by award-winning Irish author, Kevin Barry and based around characters he created for his own short story collection. Directed by Ian Fitzgibbon, this dark twisted comedy plays out in a small Irish town in County Roscommon. It features a star-studded cast: Charlie Murphy (Love/Hate, Peaky Blinders, Happy Valley), Peter Coonan (Love/Hate, The Bridge), and comedians Pat Shortt and Tommy Tiernan.

Monster (Arracht) follows the plight of Colmán, a ﬁsherman, father, and husband, living on the wild shores of Connemara in 1845 when The Great Hunger descends. As land taxes rise and crops rot, Colmán confronts his landlord. But the night ends in deadly violence, forcing Colmán to go on the run, hunted for crimes he did not commit. Gaelic with English sub-titles. Comedy, The Last Right follows the plight of successful businessman Daniel Murphy, when he is entrusted with the coffin of a man he barely knows in this riotous black comedy. Daniel must transport the coffin from Cork to Donegal for the burial, but there are more than a few bumps in the road. Features Niamh Algar (Raised by Wolves, The Virtues), Colm Meaney, Brian Cox (The Long Kiss Goodnight, The Bourne Identity, X-Men 2) and Michael McElhatten (The Fall, Game of Thrones). Directed by Aoife Crehan. Poster Boys is a warm-hearted comedy about a metrosexual Kilkenny man who works for a dodgy poster company and with the help of his cheeky but loveable nephew steals a camper-van and embarks on a cross country road trip to try to get his life back on track. Poster Boys was part of the Special Selection at the 32nd Galway Film Fleadh.

Sé Mo Laoch (He is My Hero) Steve Cooney

This lively, music-filled documentary is about Australian-Irish musician, Steve Cooney. Melbourne born Cooney is widely regarded as one of the best traditional guitarists in Ireland today and has played with Stockton’s Wing, the Chieftains, Altan and Clannad.

A touching documentary about the Referendum on the 8th Amendment to the Irish Constitution, which resulted in a win for women’s rights. Ireland’s restrictive abortion laws had been regularly criticised by a number of international human rights bodies. The repeal of the article of the Constitution allowed Government to change Ireland’s laws on abortion, which up until then had been illegal unless a woman’s life was at substantial risk. The documentary won the Special Jury Prize at the Irish Film Festival in Boston earlier this year.

Award-winning director Callum Macrae's new feature documentary explores the deaths of eleven civilians killed by the 1st Battalion, Parachute Regiment of the British Army on a Catholic housing estate in Belfast in 1971 – five months before the infamous Bloody Sunday massacre in Derry.

Seamus Heaney and the Music of What Happens

A touching tribute to one of Ireland’s greatest contemporary writers, Seamus Heaney. Heaney was awarded the Nobel Prize for Literature in 1995 "for works of lyrical beauty and ethical depth, which exalt everyday miracles and the living past." It also acts as a history of the Irish ‘Troubles’ in words and verse, and what that experience was like for people who lived through it.

Endless Sunshine on a Cloudy Day

John Connors’ emotionally raw film traces the true story of Ireland’s online star blogger Jade McCann who documented her own cancer diagnosis and that of her father’s diagnosis online. Connors, who shot to fame for his performance in Irish TV drama Love/Hate, is a proud member of Ireland’s Traveller Community. He has successfully made the transition from actor to director and took his one-man show, Ireland’s Call to Australia in 2019.

The 2020 Online Festival also features a program of short films, which have been carefully selected from the festival’s Irish Diaspora Short Film Competition, devoted solely to directors from the global Irish diaspora. The competition encouraged people of Irish descent to share their migrant experience and express their Irishness through the medium of film. The short feature titles include the Best Australian Short Film, Wine Lake, directed by Platon Theodoris, as well as the Best Overseas Short Film, What Betty Sees, directed by UK-based Colleen Forward.

Tickets for the Short Film Program and two 50-minute documentaries are $10. All other single tickets are $15.